Artist Ann Wessman has created an installation born from love – and pain. Tonight, Friday, October 14, from 5:30-7:30 Ann will be at the Kingston Gallery for a reception. 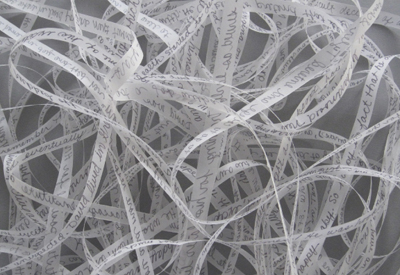 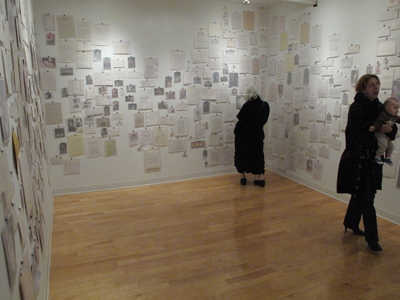 My brother David died of HIV/AIDS in 1996. He had been diagnosed in 1985 and was considered a “long term survivor” among that huge first wave of young gay men infected in the early 80’s.

While he was relatively healthy for eight years, the period from 1993-1996 was fraught with intermittent unbearable suffering. During that time I for some reason keep telling myself, “do not forget this.”

It has been 15 years since David died. I watched him descend into dementia as a result of central nervous system lymphoma, a symptom of AIDS. I also watched my 102 year old grandmother lose her memory in the last year of her long life and I watched my mother succumb to Alzheimer’s disease and a broken heart.

As I witness my own memory faltering, in what I assume is the normal aging process, I have become interested in the idea of memory and how it is maintained, particularly in the digital age of fragmentation, sound bites, etc.

How will we remember in the future, will it look different than it does today?

This exhibition is dedicated to the memory of my brother, David Christopher Peters, 1955-1996, and to all we have lost to AIDS.

Image credit: All images are by Ann Wessman.