You are here: Home / arts business / And the Winner Is… 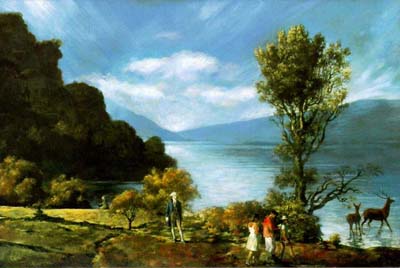 Sick of opinion polls and market research questionnaires? Well so were the artists Komar and Melamid, and a few years back they turned their annoyance into a humorous art project. They queried hundreds of people in different countries to discover what the best painting would look like, compiled the data, and then created paintings based on the information they collected. Conversely, they also polled people to discover what the worst painting would look like. Sometimes democracy is ug-a-lee.

In this poll-free, no spin blog, we want to remind you that it’s a good thing to exercise your universally recognized freedoms and liberties on November 4th and vote for the presidential candidate of your choice. If you are not registered to vote, go here to learn how. If you think you’ll need an absentee ballot or need to get one for someone you know, go here. Presidential elections can be won or lost by a few hundred votes (for instance, Florida in 2000 was won by a margin of 537) so remember fellow citizens, every vote does count no matter whose candidacy you endorse.

A quick trip into the wayback machine reminds us that it wasn’t until the 15th amendment was ratified in 1870 that the right of citizens (meaning men) of the United States to vote shall not be denied or abridged by the United States or by any State on account of race, color, or previous condition of servitude. It took The 19th Amendment in 1920 to give women the right to vote.

Down on the Cape you’ll find the Cotuit Center for the Arts has a call to artists to participate in an exhibition called The Art Vote 2008.

And if you’re interested in public policy (as it relates specifically to being an artist), you should check out the second annual Artists Under the Dome event takes place this coming November 13th at the state house in Boston.