You are here: Home / artist voices / Allan Reeder on a writer’s education 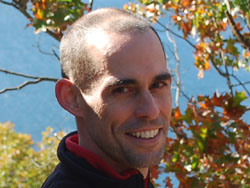 A life in the arts can lead to some interesting gigs. The career of Allan Reeder first led to MCC through his award-winning fiction (he’s won our Artist Fellowship in Fiction/Creative Nonfiction twice – in 2006 and in 2010), but it includes many other forays into the world of writing and publishing. A sampling: he’s assisted John Irving with revising his work, edited for The Atlantic Monthly and DoubleTake, and published travel essays, author interviews, and book reviews. Now, he may have his most interesting gig yet. This fall, he assumes the directorship of the Writing and Publishing Program at Walnut Hill School for the Arts, an arts-focused boarding school in Natick, where Allan has taught since 2002.

Among the programs Allan oversees at Walnut Hill are The Blue Pencil, a print journal featuring the writing of students at Walnut Hill and The Blue Pencil Online, the online magazine he built – edited by students from the Writing and Publishing Program. We asked Allan about the publications and the school, about the writing/teaching/life balance, and about a writer’s (and reader’s) education.

ArtSake: I’m impressed by the ambition of both journals, The Blue Pencil (print) and The Blue Pencil Online. Can you talk about how these publications showcasing the work of young writers developed?

Allan: Well, the print publication, The Blue Pencil, has a long history. The first issue was published in December 1917 – long before Walnut Hill was a school with the specific mission of training young artists from around the world, long before there was a dedicated writing program for young poets, fiction-writers, and playwrights. The founding editors were simply invested in creating a venue for a range of literary performances. The issue we released last spring – the 75th volume – looked back at the inaugural editorial, in which those editors wondered whether The Blue Pencil would be “a success” as a school literary journal. I don’t think they would have imagined the success of the publication today – in the quality and range of the writing, in the attention we receive from established writers (last year’s issue featured, for example, commentary on our students’ work by poet Robert Pinsky, critic Sven Birkerts, and playwright Theresa Rebeck), and in the worldwide readership of The Blue Pencil Online. What the founding editors started in 1917 is now far more than a school literary journal.

I should explain that the two magazines have distinctly different missions. The Blue Pencil primarily publishes the work of students in the Writing and Publishing (W&P) Program at Walnut Hill School for the Arts. The Blue Pencil Online (TBPO) seeks to publish the freshest, most accomplished and imaginative literary craft (in English) by young writers around the world. Much of the “virtual” publication developed from specific training that goes on in our studios. The students constitute the editorial team that runs the online magazine, which means reviewing, debating about, accepting, rejecting, editing, copyediting, and publishing pieces. They’re in charge.

ArtSake: So the training of a young writer includes training as an editor?

Allan: Yes. We feel strongly about the benefits of this. It’s one thing for a young person with literary ambitions to engage in courses and focused workshops with peers and in regular conferences with artist-teachers. It’s a broadening and very challenging additional experience – directly related to and very important to learning the craft – to assume the responsibilities of editing the work of someone far outside the intimate studio setting.

I’m reminded of a letter to the editor that appeared in The New Yorker not long ago. “A good creative-writing program will aim at making students better editors,” the author stated, “by requiring them to read intensively, exhaustively, and endlessly – and to read far more than one another’s work.” Our students do indeed read “intensively, exhaustively, and endlessly,” both as developing writers and as editors. Last year, which was the first full year of operation for TBPO, they received more than a thousand submissions – work from other young writers living across the United States and Canada and also in Korea, China, Romania, Turkey…

For me, the pedagogical opportunities of teaching writing in this structure are fabulous. I can be helping a student to see obstacles with her chosen point-of-view in a story that she’s drafting at the same time that she is working to explain to a writer in, say, Idaho – whom she does not know, not beyond what’s on the pages of a submission – the problems she sees as editor of that writer’s narrative. It’s no longer just a studio-based effort; it’s a “real-world” situation. Naturally, I’ve always had models from the past to draw on – I could pull down from the shelf a story by Flannery O’Connor to demonstrate something about point-of-view – but now I teach among plenty of other models, successful or not, from other striving young writers as well. (I should add that all submissions to TBPO are read “blind.” Our students are aware of neither the name nor the age of a submitting writer when considering his or her work.)

That New Yorker correspondent closed her letter by arguing that the aim of writing programs ought to be “not so much to produce novelists or poets as to produce more astute readers of novels and poetry – which is to say, better editors.” Reading well is where it all starts – and ends.

ArtSake: One thousand submissions seems like a good haul for the first year of operation! What’s the vision for The Blue Pencil Online as you move ahead?

Allan: The vision is big and ambitious: to become the hub for a vibrant community of talented young writers around the world. But the immediate next step is simply to invest more energy and time in improving what we do and what we’ve built. Despite our success so far, the site is still in its infancy.

ArtSake: What do you try to instill in the emerging artists you teach at Walnut Hill School for the Arts?

Allan: We talk in W&P about “sustainable practices” – those ways of engaging that a young writer can and should develop in the program and take with her. Perhaps at the top of the list of sustainable practices are reading with patience (“with mental doors ajar, with delicate fingers and eyes,” wrote Nietzsche about reading slowly and well) and re-writing with precision – and the recognition of the connection between these two practices.

I like what novelist Zadie Smith wrote in an essay a few years ago – that “[r]eading, done properly, is every bit as tough as writing.” I agree with her that good reading is not only a skill but an art, a talent. I try to cultivate this through my teaching, in part because the possibilities for development of a literary piece depend so much on a writer’s being able to see what’s already there in a draft, or potentially there, if she can read it and re-read it with imagination, with vision – to see it on the screen in the mind. Go back and look again, see again. I strive to help our writers to get better and better at finding the possibilities that are inside that scene, that moment, that line, that gesture they put there in a draft originally for no clear purpose. Once a detail on the page is picked up again for its promise or potential, then it’s time to pick up the pen again and get to work on the language, making it more specific, more precise. The possibilities open in achieving precision.

In late September we’re hosting Paul Harding, the Pulitzer Prize-winning novelist of Tinkers. In preparation for his visit, I was listening recently to an interview in which he argued that increasingly we don’t realize the degree to which we have lost – as he put it – “the authority to describe [our] own experience.” “You always have to look again,” he said. Needless to say, I’m thrilled that we’ll have the opportunity to sit down at our studio table to talk shop with him!

ArtSake: Elizabeth Bishop is a Walnut Hill alumna. Is her work an influence in your studios?

Allan: Certainly. Elizabeth Bishop’s poems and her prose are very much with us in W&P. Readings of her poem “Behind Stowe” – Stowe is still a dormitory on campus, as well as the main administrative building – are common. I just used her short story “The Farmer’s Children” in a fiction class. That she was once at work here on this campus, developing into the writer she became, is a thrill.

We’ve named our annual writing competition for young writers, now in its seventh year, after her. And I was delighted recently, after leafing through the archives of The Blue Pencil and coming across a short, unsigned, brilliant piece titled “On Being Alone,” to discover that she was the author – in 1929. So, she is read, discovered, and rediscovered here, for the range of her imagination and craft. We’re lucky to have her enduring support!

ArtSake: You’ve won two Artist Fellowships in the past decade. This is an unusual feat for anyone, but I happen to know you are also a recent, first-time dad. How do you balance your work at Walnut Hill, as well as your innumerable fatherly duties, with your writing?

Allan: I had a feeling you were going to ask that. I’d say it’s more juggling than balancing. Getting to my desk at five in the morning or even earlier used to be the solution, until my son decided that he, too, liked the early morning (a writer-in-training?). So now I write during whatever moments I can. It’s continually surprising – and reassuring – what can happen, what can fall out of the imagination and into words, if I just sit down to let it happen. But I know that when only twenty minutes of writing produces a promising new turn in a scene, it wasn’t just those twenty minutes that did it – there were hours of previous writing in the mind that contributed. And reading.

ArtSake: What’s up next for W&P’s publications and for Walnut Hill School for the Arts?

Allan: Larger audiences. That’s not a wish – it’s an expectation. It’s a certainty. Both the magazines and the school are on the verge of a blossoming in terms of gaining recognition. The Blue Pencil gets more interesting and compelling every year, and the online magazine develops a wider and wider audience and vision. As for Walnut Hill, it’s under the energetic leadership of a new Head of School, Antonio Viva, and is set to expand its reach. Once one discovers the extraordinary work that goes on here in the training of young musicians, dancers, actors, visual artists, and writers, one keeps returning. You’re hooked. It’s hard not to be. As a faculty member, I’m always eager to experience the next performance. If you haven’t been on campus to catch a show, you should make plans!

ArtSake: What’s next for Allan Reeder?

Allan: Listening for my son’s newest phrases and (eventually) sentences, helping my students see and recast theirs, and continuing to construct my own for the page. I hope to resume work this year on a novel that I began in 2008 while on a fellowship at the Vermont Studio Center (before my son was born) and to keep working on a collection of short fiction.

In other words, what’s next is to keep juggling.

Allan Reeder has been published in Memorious, The Atlantic Monthly, and The Boston Book Review, among other publications. Along with his MCC Artist Fellowships, he has been nominated as a Ploughshares “Emerging Writer” and received a Full Fellowship in Fiction from the Vermont Studio Center. In 2007, he was awarded the E.E. Ford Prize for Exceptional Merit by his peers at Walnut Hill.