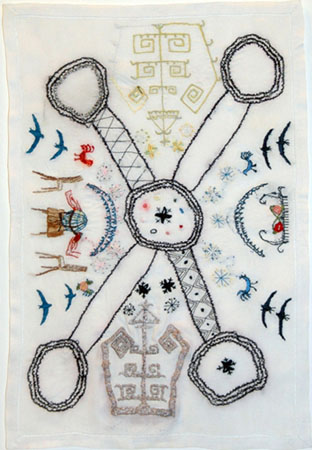 Anybody remember the video game Air-Sea Battle for the Atari 2600, circa late-70s/early-80s? When trying to come up with a unifying theme for this post, I remembered that game, which involved various pixelated battles between 8-bit planes, ships, and anti-aircraft guns. (I should’ve known I was headed for a life in the arts when my friend and I used to spend all afternoon making our anti-aircraft guns, whose pivoting canons looked a little like mouths, have long strange conversations rather than shoot down planes.)

Anyway, some of the recent news from awardees in our Artist Fellowships Program does indeed relate to the air, the sea, and battle (though perhaps not so much to talking anti-aircraft guns… perhaps a theme for an artist’s future project? Get on that, Massachusetts artists’ community!)

This month, Jan Johnson (Drawing Fellow ’10) is one of the artists exhibiting  at the A.I.R. Gallery in Brooklyn, NY in A woman’s work is never done. The show, curated by Susanne Altmann, includes work by women artists that focuses on diverse artistic approaches and blends “the personally meaningful with a close and objective eye toward cultural observation” (read more). The show runs through January 30, 2011. 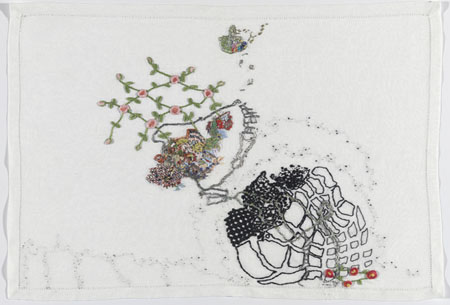 Jan’s recent work (see above) are drawings made with needle and thread, sometimes incorporating found and mixed media elements. It’s fascinating work. You can see images of the A.I.R. exhibition, including Jan’s work, on A.I.R. Gallery’s Facebook page. 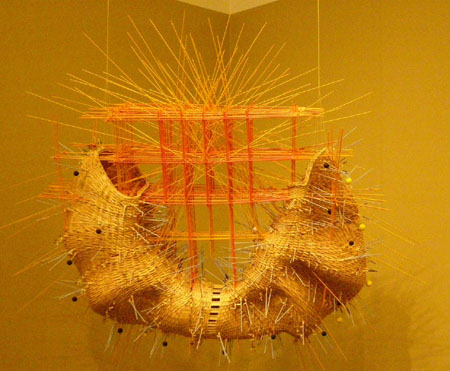 One of my favorite local art blogs is Boston Handmade, a blog by a group of Massachusetts-based artists whose creative work is made by hand. So imagine my delight when in a recent post, member/blogger Karen Mahoney of City by the Sea Ceramics wrote about a visit to Fuller Craft Museum in Brockton, where she discovered the work of Nathalie Miebach (Sculpture/Installation Fellow ’09). She wrote:

Last week I went to the Fuller Craft Museum in Brockton and had so much fun! I discovered one artist in particular I’m excited to have found and I’d like to share her with you.

Sculptor Nathalie Miebach compiles the data of tides, temperature, winds, moon phases and other specifics of various environments and creates sculptures made of “reed, wood, data”. She had two pieces in one of the current exhibits at Fuller, The New Materiality: Digital Dialogues at the Boundaries of Contemporary Craft. 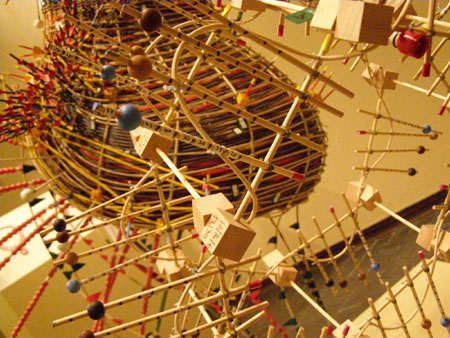 Along with showing in The New Materiality, Nathalie has a new solo exhibition opening at the Fuller this month: Changing Waters, Nathalie’s largest installation to date. It will be on exhibit January 15, 2011 – September 25, 2011, with an opening reception February 27, 2011, 2-5 PM. 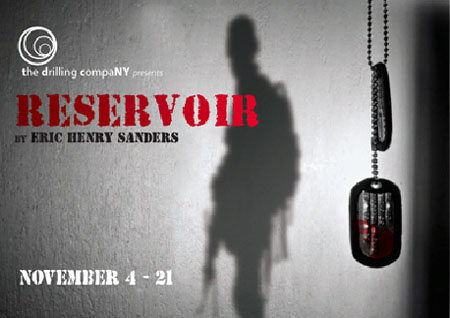 So, that’s air and sea, now for the battle. In November, Eric Henry Sanders‘s (Playwriting Fellow ’09) play Reservoir had its world premiere at The Drilling CompaNY Theatre in New York (read about the play and hear a scene performed on ArtSake). The show was extended through January 16, and the New York Times recently reviewed the play, writing:

Woyzeck, Georg Büchner’s 1837 play about a soldier driven to madness and murder by poverty, exploitation and jealousy, is sometimes considered the first modern tragedy and is a primary source of absurdist theater… Reservoir, a timely, urgent reimagining, smartly written by Eric Henry Sanders and presented by the Drilling Company, tracks Büchner’s general story line but focuses on the dilemmas of a contemporary military life.

The review praises Eric’s characterizations, calls his resolution “satisfyingly ambiguous,” and suggests “the best lesson from Reservoir is how to draw new meaning from a classic.”

Well done, all. For more news from past MCC fellows/finalist, read Fellows Notes.