You are here: Home / advocacy / A Commitment to Artists, at the State House 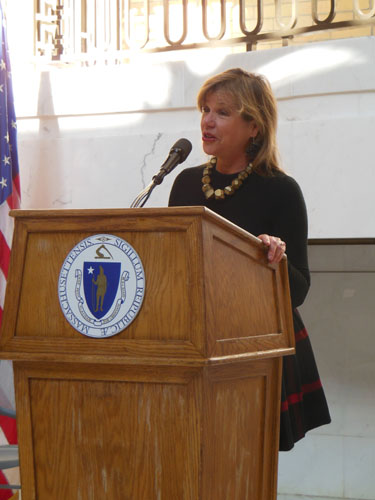 On Wednesday, November 13, 2013, artists gathered at the Massachusetts State House for the Artists Under the Dome, an annual event to acknowledge the unique contribution artists make to the Commonwealth and to foster connectivity amongst artists and state government.

The event is in its seventh year – a testament to the commitment of artist/advocate Kathleen Bitetti (read a q&a) and Massachusetts Artists Leaders Coalition (MALC), who have made it their mission to bring artists and leaders together to address artists’ issues.

When they spoke, what did we learn?

First, Massachusetts can be really proud of its commitment to artists. As Anita Walker pointed out, Mass Cultural Council recently raised its Artist Fellowships from $7500 to $10,000, and in the 2014 fiscal year, doubled the number of STARS residencies to fund artists (as well as scholars and scientists) for in-school residencies. Governor Deval Patrick recently announced a $15 million investment in cultural facilities – a tripling of funds to MCC’s CFF program. Also, the state’s legislative committee dedicated to the arts, the Joint Committee on Tourism, Arts, and Cultural Development, has active and enthusiastic leadership from Representative Cory Atkins (House Chair) and Senator Kathleen O’Connor Ives (Senate Chair), both of whom shared that enthusiasm at the event. It was telling, too, that former Chairs Representative Sarah Peake and Senator Eileen Donoghue both made it a priority to attend the event and speak about the importance of artists.

Legislators spoke about the power artists have. It’s a power that, Rep. Cory Atkins said, artists don’t talk about enough. Whereas a political issue of the day has a timely significance, the work artists do can transcend time – and be remembered. “Artists go where politicians fail,” she said. Recognizing that such power merits compensation, Rep. Sarah Peake shared that she is seeking to establish a commission to study and develop guidelines on how to compensate artists whose work is exhibited in public spaces.

Rep. Peake also quipped that support for the arts extended not only from Pittsfield to Provincetown (as the local phrase goes), but also “from Pignatelli to Peake.” Rep. Peake represents Cape communities including Provincetown, and on the other side of the state, Representative William “Smitty” Pignatelli represents communities in the Berkshires – including Stockbridge, where Rep. Pignatelli has a unique personal history in the arts. Rep. Pignatelli shared that as a boy, he’d donned an astronaut outfit to pose for Norman Rockwell when the artist created the 1969 illustration When I am an Astronaut (read more about this history).

Though his own history included an American art icon, Rep. Pignatelli said the best advice he’d gotten about supporting artists was to “buy the art of a living artist.”

Representative Chris Walsh advised anyone going through a mid-life crisis to forget the Porche – “go to art school.” He was joking, but he himself had gone to art school (RISD) to become an architect, and he was struck by the unique ability people in creative fields have to reframe questions to solve problems. The hard part of architecture, he said, was envisioning what a space might be. Whereas our engineering society leads us to imagine there’s just one perfect solution for a given problem, in truth there are countless possible solutions, and a creative approach re-envisions the initial dilemma as a means of illuminating the best way forward.

State Treasurer Steve Grossman noted that close to 60% of Massachusetts residents were not born in the Commonwealth. So why do they stay? He argued that the strength of the arts and the creative economy was central. But he did point out that support of the arts, as a percentage of the entire state budget, has dropped dramatically since its height in the 1980s. (Rep. Atkins, too, remarked that while she was happy about the $15 million for cultural facilities funding, she’d pushed for $23 million. “I’m not a cheap date!” she joked.)

So there is still a ways to go. And of course, the way the state supports its artists is ever-evolving and (hopefully) improving. To see the power of artists continue to grow and be fostered in Massachusetts, consider signing up for updates from MASSCreative, an organization that advocates for “the resources and attention necessary to build vibrant, connected, and creative communities.”

And consider attending the 8th annual Artists Under the Dome next year.