You are here: Home / music / The Sopranos 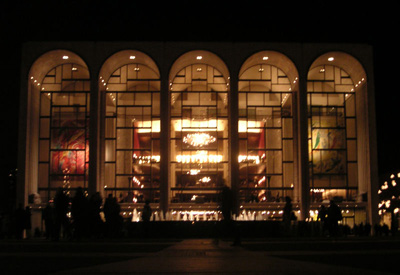 Otis B. Driftwood: Youre willing to pay him a thousand dollars a night just for singing? Why, you can get a phonograph record of Minnie the Moocher for 75 cents. And for a buck and a quarter, you can get Minnie.- Groucho Marx from A Night at the Opera, 1935

Apparently it is all the rage. It being a program called The Met: Live in HD, which started in 2006 and has grown into a worldwide phenomenon.

Thanks to the modern technological invention of high-definition broadcast, theres no need to go to Lincoln Center anymore to see the Metropolitan Opera. All you have to do is go to your local movie theater or playhouse and experience what has become known as a virtual opera house experience, well, kind of, sort of.

After having seen my very first opera in HD performance at a movie theater in Braintree a short time ago, I couldnt help but think this is the music equivalent of watching sports on ESPN, particularly seeing interviews with the perspiring singers just after they have exited the stage. Theres nothing like the HD quality projected on the silver screen emphasizing the physicality of the performers work. Its also great to hear the artists speak about the conductor, the set design, and the composers work they are performing.

There are numerous cities and towns in the Commonwealth that participate in The Met: Live in HD program, including Boston, Braintree, Burlington, Foxboro, Framingham, Hadley, Lowell, Marlborough, Millbury, Randolph, Revere, Swansea, and West Springfield, as well as the Cape Cinema in Dennis, the Mahaiwe Performing Arts Center in Great Barrington, and the Wellfleet Harbor Actors Theater.

So goodbye Logan Airport, bye-bye Amtrak train, see ya later Fung Wah bus; its off to Braintree. And who really cares if the parking lot at the cinema has an architectural quality that is somewhat different from the stunning design of the plaza at Lincoln Center? Witnessing world-class opera in a local theater is a great use of these venues, as well as a boon for the local economy. And you can buy M&Ms from the concession stand. Did I say that?

And lets not forget that Boston is home to not one but two incredible opera companies: the Boston Lyric Opera and Opera Boston. Seeing the real thing live and in person is always superior to the HD experience. So be sure to check out our homegrown talent. And heres a good tip: the ArtsBoston ticket booth sells half-price tickets on the day of the performance for many local cultural events. Heres a list of participating cultural organizations.

Postscript: Since I never purchase soda at the movies, I was shocked to discover how large a large has really become. It really is a supersize generation, Im sad to say. The drink that I ordered during the intermission of La Damnation de Faust was so big that I had to use two hands to lift it. But I digress.

Image Credit: Photograph of the facade of the Metropolitan Opera House at Lincoln Center, New York, New York. Taken on 12 March 2004 by Paul Masck and released with a Creative Commons license on 30 July 2005 by the photographer.