You are here: Home / literature / The Poet & The Artist’s Book

JACKSONVILLE, VERMONT
Because I am not married, I have the skin of an orange that has spent its life in the dark. Inside the orange I am blind. I cannot tell when a hand reaches in and breaks the atoms of the blood. Sometimes a blackbird will bring the wind into my hair. Or the yellow clouds falling on the cold floor are animals beginning to fight each other out of their drifting misery. All the women I have known have been ruined by fog and the deer crossing the field at night.
Jason Schinder (MCC FY06 Poetry Fellow)

Reading poems can produce visual images in one’s mind. What happens when a book artist reads a poem? What physical work do they produce? 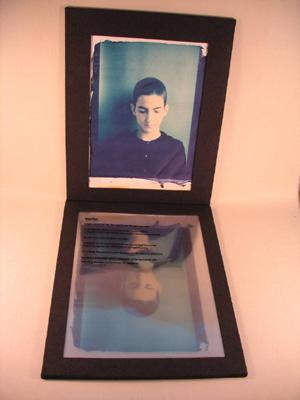 Take, for example, Lucie Brock-Broido’s three poems about suicide and execution. The chair on the left, created by Richard Minsky, is his response to her work.

Opening reception: Friday, November 6 at 7:00 p.m. The exhibition will run through November. The Pierre Menard Gallery is located at 10 Arrow Street, Cambridge, MA. Open daily from 12 p.m. – 8:00 p.m. Image credit: Short Time based on a poem by Jason Shinder. The piece (same title) is by book artist Audrey Niffenegger; she’s also the author of The Time Traveler’s Wife. Full-sized electric chair built by Richard Minksy titled Freedom of Choice was created in response to a series of poems by Lucie Brock-Broido.