You are here: Home / music / The BSO Goes to School 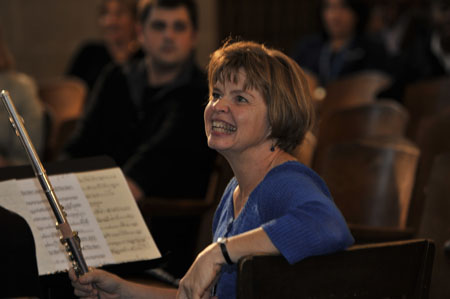 Recently, we had the pleasure of chatting with Cynthia Meyers, one of the many world-class musicians whose notes emanate from right here in the Bay State. Cynthia is the piccolo chair for the Boston Symphony Orchestra and Boston Pops, and like many professional artists and musicians, early exposure to the arts in school is an important part of what led her to music, and eventually, to the BSO. Which might be part of the reason Cynthia is back in school.

Cynthia grew up in Western Pennsylvania, in a time when music education was still very much part of public education. She studied music beginning in elementary school, continuing into high school.

“The first time I ever heard or played the music of Stravinsky was in that group,” she says.

Now, as intensive standardized tests are crowding out arts and music education in schools, Cynthia is part of a pilot program of the Boston Symphony Orchestra that sends musicians into Boston Public Schools. She is the UBS Musician-in-Residence for the BSO Academy School Initiative, which is underway this year at the K-8 Thomas A. Edison School in Brighton, MA.

Interplay with the Edison School students began last week, when Cynthia and a group of other BSO musicians met with students to introduce instruments of the wind family. The musicians took the students through a musical time machine using the song “Happy Birthday.” “We start in the Renaissance,” says Cynthia, “and go through the blues and salsa – through the present day, essentially.”

Demonstrating a variety of musical eras – and instruments – is part of the plan. “When (the students) first see the bassoon, they think it’s the greatest thing they’ve ever seen,” says Cynthia, who’s had plenty of experience teaching music, both with the BSO’s Music in Schools Program and through additional classroom visits she does with her husband, a cellist. 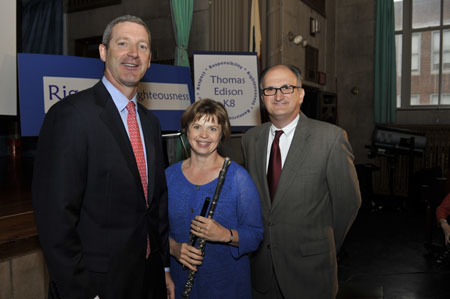 Cynthia and other musicians will continue to visit Edison School throughout the year, working not only with students but also with teachers, finding ways to supplement course lessons. “So if they’re talking about a particular time period in history class – say, the time of Henry the Eighth or early American history – we can find music from the time and talk about how it fit into the culture.”

What kind of effect can exposure to symphonic music have on these students? Cynthia says a student told her about asking her mom for an iTunes card. While the girl’s mom thought she’d download Lady Gaga, it was Mozart she was really after. “She said, ‘That Mozart guy is really great.'”

The students do more than learn about music; they also write it (something we at ArtSake, as proponents of new art in all its forms, love to hear). Students in the upper school will write 16-20 measure compositions during the year, which a BSO wind quintet will play at an end of the year concert. (How many pre-high school composers can say that a professional wind quintet has performed their work?)

Cynthia’s career includes stints in major symphonies in Omaha, Houston, and of course, the BSO, but she says she still gets a buzz from performing for students.

“There’s a special kind of energy that comes from kids,” she says. “When they hear something new for the first time, and a lightbulb goes on in their heads, there’s nothing better.”