You are here: Home / fellows notes / Scoring the “Wall” 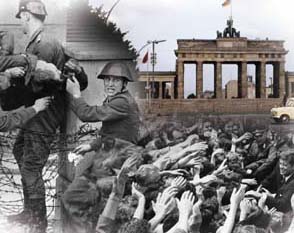 It’s been 20 years since the fall of the Berlin Wall, and a group of Boston-area filmmakers and artists are exploring the event – both its tumultuous history and the individual stories of people caught up in it – in Writing on the Wall. The film premieres this Sunday, October 11, 4:30 PM, at the Museum of Fine Arts Boston.

The film is directed by Boston College professor John J. Michalczyk and was produced in conjunction with Boston College and the Germany Embassy in Washington D.C.

We’re especially excited by the news that Ralf Yusuf Gawlick, an MCC Music Composition Fellow in 2009, was commissioned to write the musical score, which was performed by the Boston-based Hawthorne String Quartet.

To read other news from MCC Artist Fellows and Finalists, check out Fellows Notes.

Image: Promotional image from WRITING ON THE WALL, a film by John J. Michalczyk. Click the image to learn more about the premiere at the MFA Boston.