You are here: Home / painting / Lawnmower days and prison nights 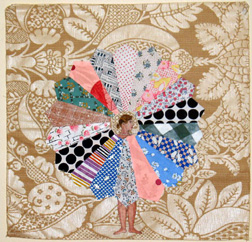 In Brockton’s The Enterprise, Jody Feinberg talks to Candice Smith Corby (Painting Fellow ’08) about motherhood/artisthood and the uniqueness of her materials (doilies, dresses) and imagery (mowers, sofas):

In her third-floor art studio, Candice Smith Corby showed a visitor an unusual self-portrait. On a green linen napkin that had belonged to her grandmother, the Abington artist had painted a straight-back woman pushing a red lawn mower and gazing dreamlike ahead. Overhead, a bird flies and a chandelier dangles.

This surreal combination of images resonates for any woman who has felt pulled by conflicting desires and obligations – family and work, independence and dependence, nurturing and self-expression. And it reflects Corby’s exploration of her own identity.

“Mowing the lawn was a great escape because it was one of the few times I couldnt hear a baby crying or someone calling me and I could daydream,” said Corby, 36, who had been married for 10 years and was focused on her career when she had the first of two sons two and a half years ago. “I was very concerned about how I was going to figure everything out. Would I have time for myself? Would I only be defined as a mother?” 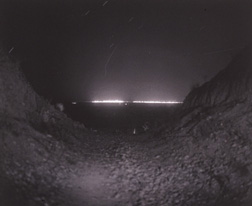 Meanwhile, Jess T. Dugan asks Steve Tourlentes (Photography Fellow ’05) about his craft, arts background, and his fascinating photographs of prisons in the latest issue of Big RED and Shiny:

JTD: What specifically is it about photographing prisons at night that you are attracted to?

ST: There is a separation that occurs when night falls and a prison becomes an optical presence in the landscape. In the darkness they make a defiant stance against the landscape surrounding it. They radiate light back into the landscape like an artificial sun. During the day the architecture and the perimeters are clearly demarcated; but in the darkness the visual boundaries extend beyond the walls. They become the light source that illuminates the visible landscape.

JTD: I have personally heard some funny stories from you about your strange encounters while photographing at night- could you tell us about your most interesting experience?

ST: There have been all sorts of interesting moments- I’ve been hassled by guards and the police, photographed in blizzards and lightening storms. Once, I was in Chula Vista, California on the US/Mexico border taking a picture without permission in the no-man’s land surrounding the state prison. Suddenly all hell broke loose, men on ATVs with night vision and bright spotlights came out of nowhere… it was very X-Files. I thought they were after me but they shot right past me and about 100 yards away they stopped a group of people using the prison grounds to cross over the border from Mexico. They never even bothered with me… maybe they assumed with the big camera and tripod I was someone official.