The path of a new play usually starts with the solitary labor of writing it and finishes with the deep collaboration of producing it with other artists. Playwright Joyce Van Dyke has crossed back and forth between solitude and collaboration – and between improvisation, personal history, and invention – to create Deported / a dream play. Joyce, whose play will be read on Monday, August 3, 2009, 7 PM as part of the Huntington Theatre Company Breaking Ground Festival of New Play Readings, spoke with us about the surprising journey of crafting a new work of theatre. 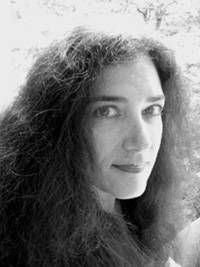 ArtSake: Deported / a dream play grew out of improvisational workshops with a group of actors. Is this the first time you’ve developed material that way? What has surprised you about that experience?

Joyce: I’ve never done anything remotely like this before. There were many, many surprises including how much fun it was to work this way, how eager all the actors and Judy [ed. Judy Braha, the director] were to help create a play (rather than receiving a finished script to interpret), the thrill and relief of feeling that I was not all alone as a writer, that I was sustained by everyone in the group. Because the process was completely new to me, I had no idea what the outcome would be, if it would even yield a play and, if so, would I feel like I’d written it? And that turned out to be another surprise, that the resulting play feels simultaneously like it’s mine and ours.

ArtSake: At the core of the play is a true story, the experiences of your grandmother and her friend during the 1915 Armenian genocide. What have you found to be the major challenges (and rewards) of working with such personally important material?

Joyce: I grew up aware of my grandmother’s and other Armenian relatives’ experiences during the genocide. It was knowledge that I fled from in the sense that for most of my life I avoided learning any more of the history. Writing this play gave me a purpose and perhaps a shield to venture into that territory, as well as the challenge of trying to find the aesthetic form for this overwhelming material. I also began to feel my way into an understanding of my grandmother’s lifelong refusal or inability to speak about what she experienced. To my amazement, partway through the writing of the play I started to feel a sense of happiness, despite the harrowing material, that never left me. There is both sadness and satisfaction in my sense that my relationship to my Armenian grandparents is so much closer now than it was while they were alive. I felt a deep sense of obligation to this material to tell the truth, to do justice to the characters impulses that belong to playwriting in general, but that operated in a doubly potent (and sometimes conflicting) way here, both on the historical/non-fictional plane and on the level of the drama. At times I felt my control of the play wrenched away almost physically by the primary material some of which included the words of my grandmother and her friend, the play’s two main characters. At times during the writing I simply had to yield to the power of that reality. I gave way, and said, I’ll go back and rewrite this, I’ll go back and turn it into a play, but first their story must come out.

ArtSake: Judy Braha, the director of your reading at the Breaking Ground Festival, also directed your play The Oil Thief at Boston Playwrights’ Theatre in Fall 2008. How does an ongoing relationship with a director impact the evolution of a new work?

Joyce: Judy’s direction of The Oil Thief came about because I’d already been working with her over a period of about two years developing Deported, which was our first collaboration. So I already knew she was a director who could help me see what my play wanted to be and I knew there was still work I wanted to do on the script of The Oil Thief. Judy is an unusual combination: very patient, very open (in a way that frees others), and very exacting. With The Oil Thief, she did some of the same things she’d done with Deported: for example, asking me to write what we called a “download” of everything that was swirling in my mind at all levels about the play’s issues, dreams, images, metaphors, characters, etc. Doing this turned out to be very helpful to me in revising both plays, and also in helping me to hold onto their original impulses. In terms of Deported, the collaboration with Judy was intrinsic to the whole process and resulting play. I might well have written a play on my own about the genocide, but it would never have been the play that emerged from our process. For a writer to have an ongoing relationship with a director you can trust completely both personally and artistically well it has to be a good thing, doesn’t it? We all want to trust, and we all want to work with people we can trust. I think it’s hard to generalize because there’s no recipe that’s the whole point, everything depends on the quirks of the individuals involved, their shared aesthetic, how they complement each other, the specific ways they talk and work together. For me the experience has been liberating, consoling, encouraging, inspiring and more.

ArtSake: Before turning your energies to playwriting, you taught Shakespeare and poetry, and worked as a speechwriter in D.C. Can you talk about how those “past lives” reverberate in your current work as a playwright?

Joyce: I think the reverberations are very extensive and deep especially with respect to teaching and Shakespeare but it’s not easy to put my finger on where and how and why. And it’s not as if I am always drawing on those past experiences in a conscious way. For example, Hamlet ended up becoming a sort of shadow-play that is woven throughout The Oil Thief, but not by design. It’s just that one character in The Oil Thief is an actor, and he needed to be cast in something and I wanted it to be a recognizable role so I made him Claudius in Hamlet. It was a simple decision, I thought. And then very much to my surprise, it was as if I’d opened a gate and Hamlet began flowing into The Oil Thief to an almost alarming extent to me. Right now I’m starting to work on a new play about a production of Othello. But it’s not as if I am trying to base my plays on Shakespeare’s or anything like that. The Othello story interests me because it’s about a real historic production of the play, and it’s a backstage story which is always fascinating although this particular situation also has big cultural and political ramifications. The fact that I also get to be immersed in a Shakespeare play that I love is part of the personal pleasure of working on this project. A lot of what I am conscious of in terms of reverberations has to do with technical and structural things or ways of thinking about character or the use of language. Or attitudes toward the audience. I think the audience is a brilliant organism, and I think I derived that sense from Shakespeare. As for the time I spent writing in D.C. it’s a reservoir I’d like to draw on, but haven’t yet. I’ve had quite a few Washington characters and themes that at first loomed large and then were pruned out of plays I’ve written. I’d like to center a play in D.C. In America hardly anyone writes plays (at least that that I’m aware of) about the people who run the government. Isn’t that strange? Why do we not write about the center of power in politics, and also in corporate life?

Joyce: I’ve just finished revising Deported / a dream play for the Breaking Ground reading at the Huntington on August 3 which I’m excited about. Hearing this newest version of the play along with an audience will give me a feeling for the whole which you can only get with an audience’s contribution the rhythms, proportions, sense of flow, and anything about the storytelling that needs work. I’m sure I’ll be making further revisions based on what I discover from the Breaking Ground reading. I’m also working on a couple of new plays, including the Othello play. And then there’s always the work of trying to get productions.

Joyce Van Dyke received the 2009 Elliot Norton Award for Outstanding New Script for The Oil Thief, which was commissioned by the Ensemble Studio Theatre/Alfred P. Sloane Foundation Science and Technology Project, and received its premiere in 2008 at the Boston Playwright’s Theatre. Her play A Girl’s War premiered at New Repertory Theatre in 2003. Joyce is a Huntington Theatre Playwriting Fellow, and her play Deported / a dream play will be read on Monday, August 3, 7 PM, at the Carol Deane Rehearsal Hall, Calderwood Pavilion at the Boston Center for the Arts as part of the Huntington Theatre Breaking Ground Festival of New Play Readings.