You are here: Home / artist voices / Interview with Barbara O’Brien 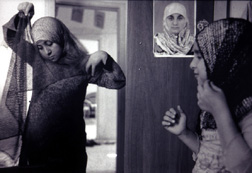 The discussion marks the opening of Uncommon Denominator, a new photography exhibition running through May 30 at the Trustman. The exhibition features photography by 10 2007 Fellows and Finalists.

Im so excited about this show, says OBrien, nd its depth, quality and range of ideas. Shes interested in the way the artists work reflects the documentary tradition, from both a political and a personal perspective, and the intersection of the two.

Since starting at Simmons in 2006, OBrien, who oversees the arts administration program in addition to directing the gallery, has specialized in organizing group shows that create dialogue. She often selects artists that dont know each other, or several artists from Boston along with one from outside the region. OBrien, who previously served as editor-in-chief of Art New England for four years, brings an uncommon perspective to her assessment of the Massachusetts contemporary art scene, having served as a critic, curator and photographer in her own right.

As the curator of a college gallery, OBrien feels a responsibility to create opportunities for artists that commercial galleries do not. She sees the density of colleges and universities in the region as the biggest asset to its professional art scene.

You dont have to convince people to come into the gallery, she says. Its part of the campus. Critics see colleges and universities in their path, like commercial galleries. It broadens and deepens the audience. It can deepen the experience for people who already appreciate contemporary art, and it broadens the age and demographics. What a college does is create this incredible dinner party they really deal head on with class, gender and cultural diversity. Isnt that who [contemporary art is] not bringing in? Isnt that an incredible opportunity?

OBrien praises the regions network of noncommercial art venues: university galleries, nonprofit art museums, and even libraries. She cites Rania Matar as an example of an artist who has found a broader audience through exhibition opportunities in these venues. While at Art New England, OBrien assigned a review of a Matar exhibition at a library. [The for-profit] Gallery Kayafas has her now, but thats because Katherine French [at the nonprofit Danforth Museum in Framingham] had her photo biennial [which Arlette Kayafas co-juried], she notes.

OBrien sees herself as an advocate for artists, and arranges studio visits and trips to rural parts of the region to find fresh voices and work, and to answer the question, How do people outside of urban centers create an art community?

The dialogue that arises from the varying viewpoints in a group show are a key element to OBriens curatorial work, and she sees dialogue as crucial to appealing to the broader audience of the college. In the case of Uncommon Denominator, Weve selected people that deal with the sociopolitical rather than the highly formal, she says. The question of meaning vs. formal beauty. In the context of the Simmons community, were dealing with a broader range of ideas. People from gender studies, philosophy and other areas of study will be interested.

The group of artists selected by the MCCs Artist Fellowship program provides an exciting means for OBrien to help further her goals for the gallery. One thing that struck me about the group is the number of artists whove been working on a body of work for years, she says. MCC supports the meaning and the core philosophy of the artists. They support the individual. I think the work that the MCC does in supporting the range of forms in contemporary photographic process is invaluable. It gives so much hope to the art community.

Uncommon Denominator runs through May 30 at the Trustman Gallery, Simmons College, 300 The Fenway, Boston. The panel discussion with artists Rania Matar, Claire Beckett and Anne Rearick and moderated by Barbara O’Brien will take place from 4:30-6 on April 29 in the Kotzen Meeting Room at Simmons College. A reception with the many of the photographers whose work will be on view will be held in the Trustman Gallery at 6 p.m. following the panel discussion. All events are free, open to the public and accessible.