You are here: Home / crafts / Inaugural art: a roundup 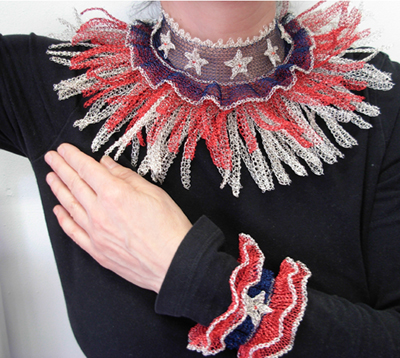 So, this roundup is going to be all about the inauguration, our president, and of course, the nation of art (and to celebrate, I’ve re-posted fiber artist Adrienne Sloane’s “Inaugural Necklace and Bracelet,” above).

Speaking of the inauguration, The New England Journal of Aesthetic Research has a pictorial review of the event. (Always intriguing to see an artist’s photo-journalistic choices.)

Berkshire Creative reports on striking similarities between the inauguration and… Tanglewood.

One difference: Tanglewood is generally warmer. But it was an icy day for a classical music, so can you blame the quartet for pre-taping their performance?

At Slog (of Seattle’s The Stranger), Jen Graves delves into the tradition (since Reagan, anyway) of borrowing an esteemed painting to hang in Statuary Hall during the inaugural luncheon. (Check out Obama’s choice.)

Remember that petition advocating for a Secretary of Arts? CultureGrrl isn’t convinced a Culture Czar is what we really need. Others, like Big RED & Shiny’s Matthew Nash, are not necessarily against the idea, so long as the post would be effectively used.

The LA Times Culture Monster blog speculates that Chicago attorney Michael Dorf is the front-runner to be the new NEA head. Also at Culture Monster, Mark Swed says “we have reason to believe we have an arts president” (but he’d do well to get a bit artier).

Part two from Arlene Goldfarb’s exploration of what a new WPA for artists might mean. Great stuff! (Part one is here.)

And finally: playwright Theresa Rebeck loved loved loved everything about the inauguration… well, except for the art.

Anyway, being an artist at Obama’s inauguration is the quintessential tough act, and I do salute those musicians and writers. But I would like to take this moment to publicly endorse Art. Art is great. At its best it engages the intellect and challenges the spirit; it connects us across history and reminds us of our humanity. I think we should all just remember that, as long as we’re taking the time these days to think about fixing the planet.

And at the next inauguration maybe Steve Colbert could write the poem.

(For the record, I thought Elizabeth Alexander’s poem [c/o Poets.org] had a graceful power – though I bet I’d enjoy Colbert’s inaugural artistry, too.)