You are here: Home / artist to artist / How Do You Know When Your Work Is Done? 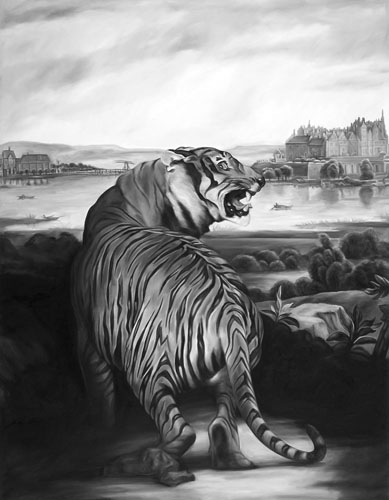 At what point is a work of art truly, fully complete? When you’ve achieved your vision? When all final edits have been sent to your publisher? When you’ve simply run out of paint?

We asked artists in a range of disciplines: How do you know when your work is done?

Shelley Reed, painter
It’s never really done, I just can’t bear to work on it anymore. They generally take a long time. I could always go back in and make bits better, but it would be soul-crushing and intensely boring not to move on.

Sean McCarthy, writer
I almost always have an easier time starting stories than I do finishing them. I must have at least a couple dozen “starts” or unfinished stories lying around the drawers of my desk and on my computer. Sometimes it is a matter of lacking a resolution, or needing the right final paragraph or sentence to close, but more often than not, a story doesn’t look or feel finished until I’ve cut absolutely everything that I can. Once I do, and can see the real shape of it, usually things begin to come together, but even after that I’ll usually let it sit for a while. On a rare occasion I’ve had a story accepted at the first place I’ve sent it after just a few revisions, but I’ve had others – many – that I’ve had to send out for a few years before they get in somewhere, and then of course others that never get published at all. Even if I think it’s done, if it comes back cold from the first ten or fifteen places, I’ll sit down and take a look at it again which usually means more cutting.

Cullen Washington, Jr., visual artist
The work is never done. It is always in continuation. I look at the work as a series of solutions. Each piece is a study that is one possible solution out of many. Each one is in conversation with the one before it, as well as offering relevance to the next.

Annette Farrington, writer, artist, and singer/songwriter
I try to work as organically as possible, letting the work lead me intuitively. I believe that each song, writing or painting I produce has a life of its own and I am just the messenger of the creative force. I have to listen very careful and feel very deeply as to what the sounds, words, colors and shapes want to become and also honor them when they tell me the work is finished. Like the Zuni artists who carve the Zuni fetishes – they are intuitively drawn to a rock or gem and they study it very carefully. They listen and feel that the spirit of the stone will reveal itself as to what it wants to be. Once the artist intuits this message he/she begins to carve the animal spirit into the stone. In essence the artist is revealing the stone’s true nature. I try and do this with my work. Of course I also look and say, am I satisfied with this creation, does it do something for me, does it excite me in some way? If the answer is yes then I know it is done.

Scott Tulay, visual artist
With some larger diptychs or a recent tetraptych, which is about 6′-0″ x 7′-0″, I have to work on our large dining room table and rig extensions to the table on the sides to see the whole piece at one time. Usually I start these at night and keep drawing until I can’t stay awake any longer. Because I know we need a place to eat the next day, the drawing is done.

Elizabeth Streb, choreographer
I run out of time or money or get bored or all. Nothing else would act as the impetus for cessation of making a choreographic event.

Michael Zelehoski, visual artist
I hate to say it but when it sells. Until then nothing is safe.

Sean McCarthy recently had a fourth story accepted for publication with Glimmer Train, and his story “The Den” placed third in The Ledge Magazine’s Fiction contest, scheduled to be published this spring. Two of his stories published this year were nominated for the Pushcart Prize.

Shelley Reed was recently awarded a Traveling Fellowship by the SMFA.