Some news & notes from past MCC Fellows/Finalists to accompany this month’s turkey (or turkey alternative) suppers. 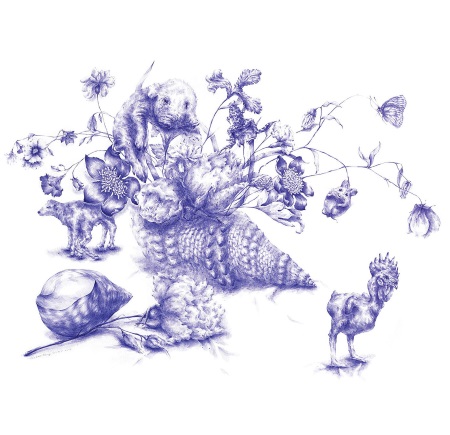 Cathy Jacobowitz and Letta Neely read with two other Wildheart Press authors for an event at More Than Words Bookstore in Boston (11/8, 2 PM). The readings will all focus on the theme of youth.

Andrew Mowbray and Daniela Rivera are both included in New View: 2014 Faculty Show at The Davis Museum at Wellesley College (thru 12/21).

Elizabeth Alexander has a dual show with Alicia Renadette called Merger, at Mills Art Project in Easthampton, as part of EastWorks Open Studios (11/15-11/16).

Alexandra Anthony‘s documentary film Lost in the Bewilderness will have its official Boston premiere 12/4, 7 PM at the Museum of Fine Arts, Boston. The film will also screen as part of The Best of the New York Greek Film Festival program at Kendall Square Cinema (11/6, 7 PM). The film had its New York City and Latin American premieres in October. More news.

Amy Archambault has an installation, Futile Ascent as part of the exhibition TEEM at GRIN Gallery in Providence (11/20-1/10, opening reception 11/22, 12-9 PM). She’s also a new member at Boston Sculptors Gallery.

Sarah Bliss will have a work, Laundry Line, displayed on the 80-foot-tall multi-screen LED Marquee at Boston Convention & Exhibition Center, as part of the Public Media Art Commission in Boston. It can be seen 12/11-2/24, with an artists’ reception 12/11, 6-8 PM. Also, Sarah’s work You Leave Here travels to Airspace Projects in Marrickville, Australia, on 11/22.

David Bookbinder has published a book of his Flower Mandala images. Fifty-two of the images, along with essays, are collected into the book, part of the fulfillment for a Kickstarter campaign (see a preview).

Sari Boren recently returned from a residency at the Vermont Studio Center.

Prilla Smith Brackett recently had four pieces from her Dreams of Home Series acquired by Danforth Art. She has an dual exhibition with Amy Ragus, called Fractured Visions, at Danforth Art opening in March 2015. This month, she’s part of the invitational exhibit Plenty at 13Forest Gallery in Arlington (11/21/14-1/9/15, opening reception 11/21, 7 PM).

Congratulations to Janet Echelman, who won a Smithsonian Ingenuity Award. Read an article about the artist.

Regina Hansen (Fiction/Creative Nonfiction Finalist ‘98) has a short story called The Horn of Isafel published in the collection All the Night Tide (Aadenian Ink 2014), a group of stories based on the poems of Edgar Allen Poe.

Asia Kepka‘s photography project Horace and Agnes is featured at the Griffin Museum of Photogrpahy Main Gallery (thru 12/14). Read about the project in Slate.

Colleen Kiely (Painting Fellow ’98) has two drawings in the Works on Paper show, juried by Al Miner (curator at the MFA/Boston) at the South Shore Arts Center (thru 12/21).

Steve Locke‘s first monograph there is no one left to blame is being published by Samsøñ.

Tara L. Masih‘s essay “Be Prepared to Evacuate,” which appears in Facing the Change: Personal Encounters with Global Warming (Torrey House Press), was excerpted and adapted Stephen Clapp of Dance Box Theater as part of its performance Windswept.

Thomas McNeely is reading with Annie Weatherwax at Harvard Bookstore (11/14, 7 PM) in an event presented by the GrubStreet Launch Lab.

Rachel Mello recently created, on commission, a set of brightly colored paisley sheep and their sheep-dog companion in Somerville’s Union Square. She’ll also be exhibiting photographs in the group show Illuminated at the Nave Gallery (11/15-12/14, opening reception 11/15, 3-5 PM). Rachel is co-curating the exhibition The Sketchbook Show at Nave Gallery. Submissions are due 11/16. More info.

Monica Raymond wrote the lyrics for the winter song After Harvest (for two sopranos and a harp, music by Timothy Takach). The song is having its world premiere at the Schubert Club in Minneapolis on December 18th at noon as part of the courtroom concert series. Also, Monica’s short play Novices will be performed as part of a student festival at Boston University Student Theater (12/5 & 12/6, 8 PM).

Anna V.Q. Ross recently had a poem in Verse Daily.

Peter Snoad is having the world premiere of his award-winning comedy Identity Crisis at Hibernian Hall in Roxbury (11/21-12/7). This is the third of four full-length plays by Peter being produced by Hibernian Hall, where he is Visiting Playwright. Identity Crisis was winner of Centre Stage-South Carolina’s 2010 New Play Festival.

Rachel Perry Welty was Artist-in-Residence at the Isabella Stewart Gardner Museum in Boston, living in the Museum for the month of October, working and reading and thinking and photographing and accessing archives and letters and collections. She recently exhibited work in Open Studios at the Elizabeth Foundation for the Arts in NYC.

Elizabeth Whyte Schulze has work in the show The New Textiles at Mobilia Gallery (thru 11/15).