You are here: Home / useful links / Clarity and Confusion: a roundup 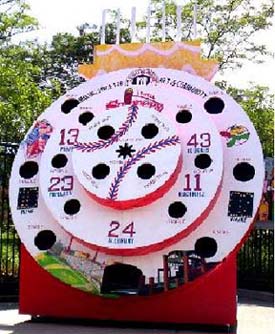 Two teen artists in Lowell have created a baseball-themed work of public art (seen above), to be unveiled at today’s (8/6) Lowell Spinners game. The work is dedicated to the memory of Joann Weber, a baseball and art enthusiast, and was created in partnership with the Revolving Museum.

Speaking of public art: St. Paul, MN aims to quell road rage with art that confuses the rage right outta you. Consider the image to the left, from the Art of Traffic Calming project of the City of Saint Paul Public Works and Public Art Saint Paul.

Confused? Less anxious? More aware of the environment around you? Consider yourself artfully/traffically calmed! (It’s an intriguing idea. But before we run out to erect signs like these in Massachusetts, we’d be wise to keep in mind our track record with puzzling images.)

Rigoberto Gonzalez, one of the panelists in this year’s Poetry Artist Fellowships review, has won the San Francisco State Poetry Center Award (as reported by the Critical Mass blog).

Jeff Warmouth (Sculpture/Installation Finalist ’05) will be among the artists showing works that “push the medium” in Electric Shadows, An Experimental Film Festival at the Axiom Gallery, this Friday, August 8, 8 PM.

If you missed Joan Wickersham (Fiction/Creative Nonfiction Fellow ’08) speaking about her book The Suicide Index on WBUR’s “On Point,” catch it here. (And a friendly reminder that Joan will read at Porter Square Books this Thursday, August 7, at 7 PM.)

The Filmmaker Magazine blog posted an intriguing summary by Noah Harlan of 2.1 Films about digital distribution/exhibition models for independent film, from the Sundance Producers Lab. A taste:

We refer to these systems (Snag, Hulu, youtube, etc…) as online distributors but in fact they are not. They are online exhibitors… Some are destination sites like youtube, some send the content to you (Netflix’s box) and some allow you to move the movies around (Snag) but at the end of the day they are exhibitors. The consequence of that is that you, as the producer/filmmaker, are now the distributor… This means that the films that most need these self-distribution models (small movies) are going to have an additional cash burden placed on them at the time of production. This is an obstacle to the small filmmaker really making it in the new revenue marketplace.

Images: Public artwork by T. Stover and Toai Thach; an “art sign” from the Art of Traffic Calming Project of the City of Saint Paul Public Works and Public Art Saint Paul.