You are here: Home / advocacy / Arts and the Public Dollar 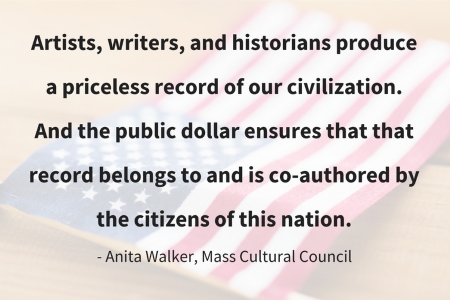 Last month, various news outlets reported that federal funding for the National Endowment for the Arts (NEA) and National Endowment for the Humanities (NEH) is in danger of elimination. Mass Cultural Council Executive Director Anita Walker summarized the possible funding threat in a recent essay exploring the arts, democracy, and the legacy of President John F. Kennedy, whose efforts led to the creation of NEA and NEH.

See Mass Cultural Council’s Advocacy Action Center for updates on the budget process and for the latest data on the nonprofit cultural sector’s contributions to the Massachusetts economy and quality of life.