You are here: Home / artist to artist / Artist to Artist: Candice Smith Corby and Julie Levesque

But creatively, the two artists draw from a similar place – a basis of stirring personal inquiry.

We invited Candice and Julie to engage in a dialogue about their work, and they found shared ground in explorations of family connections, domestic imagery, and frozen moments. 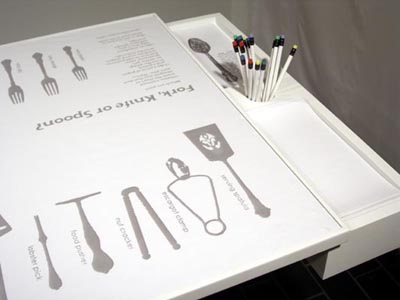 MCC: I am curious how a particular work of art begins for each of you. With an idea? With a material? With an image?

Candice: A lot of times, I get an image in my head, or at least a portion of it. Or maybe I’ll hear a phrase from a song, or when I’m reading, a phrase will strike me. Sometimes they’re family quotes. But they’re always visual – the language is always visual – so I get an immediate picture. And the material is already figured out for me: gouache and watercolor. Although sometimes I’ll bring other things in, like acrylic, flocking, glitter or different sprays.

Julie: For me, it really depends on what I’m doing. If it’s an installation, it almost always starts with a space. But if I’m just working on individual sculpture, it usually starts with an idea that has a sliver of potential. And then I just hope that, somewhere along the line, there’s that moment of magic that expands it and touches something that’s universal. Materials, in the beginning, were really important to me. They really helped me sort things out. But now its really moved more toward concept, and then the materials fit the concept.

Candice: So you have a concept, and then you think about how it might become physical, and what might make the best match?

Julie: Exactly. There are some materials that I’m really excited about, like salt. If I can drag that in there, I will.

MCC: One thing that you pointed out, Julie, was that both of you explore a kind of domestic narrative in your work, both in the materials you use and in your subject matter. What is it you find in this domestic place that’s so fertile for your art?

Candice: There’s a public image and a private image that are always hand in hand. What somebody might see from the outside might be completely false from the inside. Now that I’m a mother, there are days when I feel like I’m a crazy person, and then there are days where I feel totally at ease. You can be the same person and have opposite ends of saneness. I look to the women in my family as references – those are the stories I hear. I definitely have specific little dramas that I reference in my work. 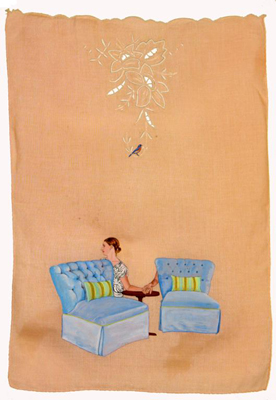 MCC: So it’s not as much that you’re attacking the grand theme of the domestic, but that you work from ideas and events from your own life and family?

Candice: I do both. I think there are definitely autobiographical stories that I’m referencing but I think everyone has those stories. I’d like it to be more universal so that not just I can identify with it.

To give you an example: one of my grandmothers is not a nice lady. And she never has been. She’s older and sort of senile but she’s still able to muster up some nastiness every time we see her. She went to church because you’re supposed to go to church, and she wore certain things because you were supposed to. But the way she behaved behind the front door is different. Ironically, everyone at the nursing home loves her and thinks she is the sweetest old lady. Those are the things I think about – the personal vs. the public, and the humor within the serious.

Julie: I think this is where we match up really well. Because I could have just said basically what you said. It’s that contradiction of what’s presented as what family life is supposed to be, as opposed to what it actually ends up being, when you get right down to it. Everybody thinks that they really shouldn’t be quite the way that they are. I think we really suffer from what marketing projects to us in that respect. It sets up a perfect tension.

I like to think in terms of spaces. When you’re a kid and you’re growing up, you have to walk that minefield. Whatever landscape youve got is the one that you’re going through, and there’s just no way out of it. When you look at it through a kid’s point of view, those worlds are really small and really intense. We have forgotten how intense they are. I keep dragging myself back there to visit that – like the second grade classroom that I built (What Remains). When people got into that space, they exploded with their own stories. 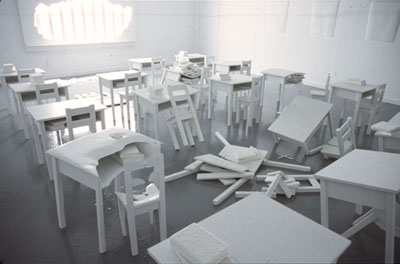 MCC: Identity is such a strong current in both of your bodies of work. Can you describe how identity plays into your art, such as Julie’s installation Fork, Knife or Spoon?

Julie: Fork, Knife or Spoon? is a show that’s based on surprising people into telling the truth about themselves. The core of it is a table with a graphic of all the European silverware, like a pickle fork and a slotted spoon and a dinner knife. People are invited to trace the image of one and write why that utensil best describes themselves.

It started out with my mom. I had just seen Pat Shannon’s exhibit at Boston Sculptors. She had taken furniture that belonged to all of her family members and sanded it down to its bare wood and arranged it together. I started thinking about what I would choose as an object for my mother, and what would she choose. And so I tried to ask her that question. And she refused to answer me. It was hitting a button, and she just would not go there. And I got really frustrated with her, and I said, “Okay mom, just tell me, are you a fork, a knife, or a spoon?” And she immediately said, “Oh my God, I’m a salad fork. I just like to poke a little bit!” And we laughed so hard because it was so true. That’s exactly her. I built the idea into a show at Clark Gallery a while ago, and I’m bringing it back to Babson College. I’m expanding it to an online conversation. It’s a blog and a network. People can post there directly, or they can text or email me and all of their responses will be on the site and then printed out and taped to the windows as part of the physical exhibit. I want to see how viral I can get this to go.

Julie: It’s something really different for me. It’s made me talk a lot to other artists who are working with collaboration, like my studio-mate Deb Todd Wheeler and Jane Marsching.

Candice: When I choose furniture (to depict) in my work, I’m thinking about how they represent people. Or somebody’s posture. The way that the chair might be positioned. I try to find furniture that gives a sense of personality or a point of view, confrontational or coy, turned over or turned away. 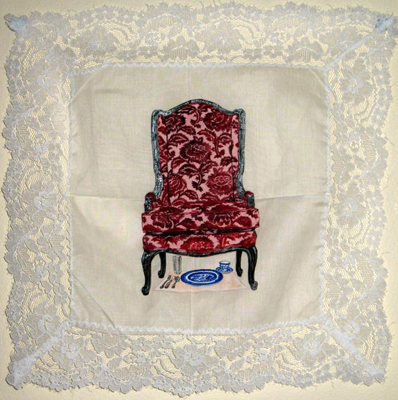 Julie: Is there furniture that you use that’s authentic, like your grandmother’s couch?

Candice: There are a few. But I also have a furniture fetish. So if I could, I’d probably have ten couches or more.

Some of my images aren’t exactly someone’s specific piece of furniture, but they do reference the situations they’re from. Some are symbolic, too. Furniture and objects also go back to that idea of representation of perfection, what you have and what you don’t have.

Julie: A lot of your imagery could come from a ’50s ad, with that perfect woman in there holding up hundreds of objects. I love the balance you’ve gotten in that frozen moment. There’s a sense of, if I could just hold on! I think you capture that so well. I have the sense that there’s stillness there in that chaos. That contradiction totally speaks to me. 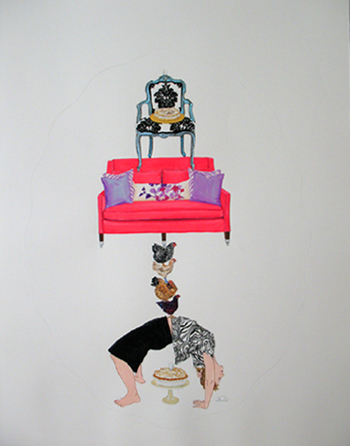 Candice: I like how you talk about the stillness and the frozen moment. I don’t deal with change very well myself. It makes me think of a drawing I made once. It was 95% finished. This drawing was pretty detailed, immaculate, no mistakes. Then I spilled my whole cup of coffee on it. It’s on the paper, it’s there. You can’t erase it. So I looked at it, mopped it up some. And I think – there was a train or an airplane – and it all became the exhaust smoke.

I’m always trying to freeze things, but you don’t always have control. And you have to keep going.

Julie: I’ve come to really cherish that. Being a sculptor, there are times when I have made a mistake on an expensive piece of material, completely shattering what I was trying to build. And in that physicalness, I end up really changing it – having to sit down and say, now what? Most times, that will shift me into a direction that is almost always 100% better than where I was going. That’s where a small idea starts to change to something that becomes meaningful.

MCC: What’s up next for both of you?

Candice: I’m working on a project in which I’ll do a wall installation that goes beyond one wall, an interior space. But I’ll be using furniture.

Candice: They’re painted, life-size furniture on canvas that I cut out and then apply to the wall. A lot of times I paint the wall either a graphic, flat pattern or a wallpaper pattern. But I might play with having more of a spatial situation to set the furniture in. But it all comes back to a flat surface.

Candice: Thanks. So I’ll make some new pieces for that. And then I have a series of drawings/paintings that I’m working on, that are loosely based around feats of strength.

Julie: Kind of the supermom thing.

Candice: Playing on that. 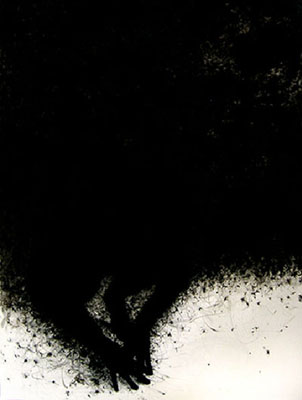 Julie: After “Fork, Knife or Spoon?” I’ll be in the salon show at Clark Gallery in December and then I’ve got a show in Appleton WI at Lawrence University next March. So that is going to carry on the two-dimensional work I’ve been doing.

My work is really changing. I’ve been making these drawings of crouching figures on large white panels that are really spare. Working on “Fork, Knife or Spoon?” has given me a break from that. I’m not quite sure where I’m going quite yet, but I hope that it gels into something new.

Candice Smith Corby’s (Painting Fellow ’08) paintings have shown at Miller Block Gallery, Danforth Museum of Art, and HallSpace Gallery, among others. She has an exhibition forthcoming at the Essex Art Center in Lawrence, May 8-June 12.

Join the dialogue – share your own responses to these questions or the artists’ discussion by adding a comment below.